In cooperation with the Israel Ministry of Tourism, Israel Travel News Ltd. Specially prepared to meet the needs of the British market , this new publication spotlights Israel as a tourism destination. Read more >
Elma Arts hotel comes under new management
This magnificent complex boasts 95 well appointed hotel rooms, a fine restaurant, spa and pool overlooking the Carmel mountain and the coastline; but it is also home to a comprehensive world of art. 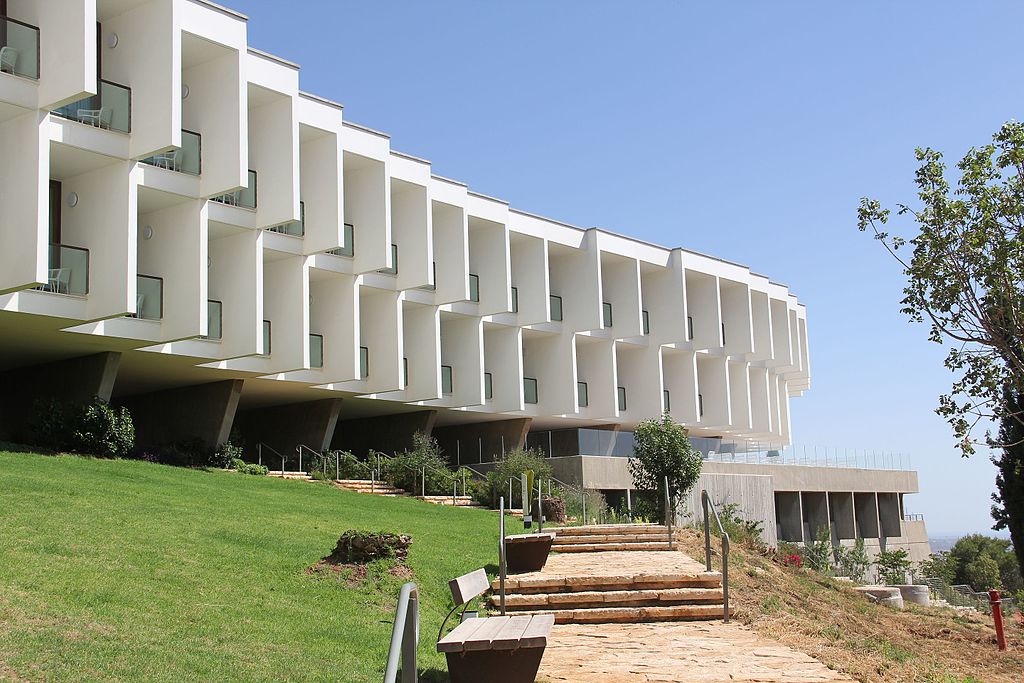 The luxury hotel located in Zichron Yaacov is being managed by the Kerem management company, which is owned by Ephraim Kramer, one of the owners of Eshet Tours, and Gadi Freiber, former CEO of the Fattal Hotel chain.

Elma is a hotel and arts complex that uniquely combines luxurious hotel accommodation with the best in international music, plastic and performing arts. Spanning more than 100 acres, Elma stands on the edge of the Carmel ridge, overlooking a spectacular view of the Mediterranean coastline and a green patchwork of fields and wooded slopes. The historic building is considered one of Israel’s architectural highlights, and won its designer, Yaacov Rechter, the Israel Prize in Architecture.

After years of use following its inauguration in 1968, the magnificent building was gradually abandoned, to a point where it was scheduled for demolishing. It was at that point that Lily Elstein, a scion of the founders of Zichron Ya’acov, came to its rescue. Like her pioneer ancestors, who founded the village a hundred and forty years ago, Ms Elstein decided to undertake a pioneering mission of her own: to breathe life in the abandoned building and transform it into a hotel and arts complex. Ms. Elstein acquired the place in 2005, and founded Elma.

After more than ten years of strenuous preservation and restoration work, the Elma Arts Complex and Luxury Hotel opened its gates to reveal its old-new beauty to the world. This magnificent complex boasts 95 well appointed hotel rooms, a fine restaurant, a spa and an enchanting pool overlooking the Carmel mountain and the coastline; but it is also home to a comprehensive world of art, populated by creations from some of the most prominent Israeli artists. There is much to discover at Elma: the expansive galleries, where pictures are illuminated by natural but never direct sunlight; the fascinating sculptures standing in open-air patios or in the beautiful and spacious gardens; the amphitheater (one of four) with a view to the sea and setting sun; and the highlight, two concert halls equipped with the latest in design, acoustics and technology that host local and international top performers and composers. All these make Elma a rare gem of hospitality and art.