In cooperation with the Israel Ministry of Tourism, Israel Travel News Ltd. Specially prepared to meet the needs of the British market , this new publication spotlights Israel as a tourism destination. Read more >
Israel Influences the Chinese Tourism
Israel’s Ministry of Tourism's envoy in China has been selected for the list of influencers in Chinese tourism for 2020 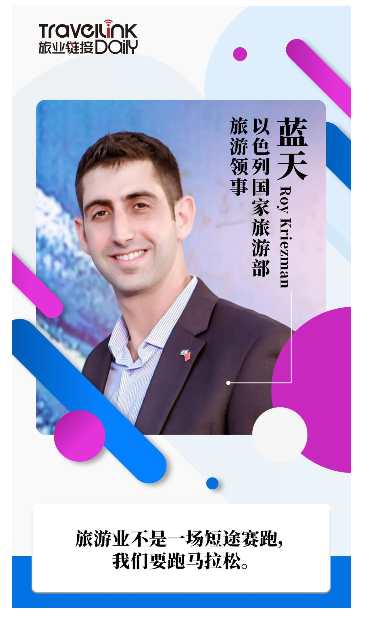 Israel’s Ministry of Tourism’s envoy in China has been selected for the list of influencers in Chinese tourism for 2020. The list is published annually in “Travel Link Daily” magazine which is considered one of the most important and influential in the industry.

Israel’s Director General of the Ministry of Tourism, Amir Halevi: “The emissaries of the Ministry of Tourism are also working during this period to preserve Israel in consciousness, so that it will be the first destination they will choose to reach with the opening of borders and the gradual return to world tourism. The rate of immunization of Israelis is arousing interest among the tourism industry in the world and it is of utmost importance to make sure that of all the destinations in the world Israel will be the first tourist destination they reach and this is exactly what we do despite the severe budget constraints”.

Roy Kreizman, director of the Bureau of the Israeli Ministry of Tourism in China, was elected to eighth place in the list of 16 most influential in Chinese tourism for 2020. The list is published annually in Travel Link Daily magazine, which is considered one of the most important and influential magazines in the industry. Along with him, the list also includes the Chinese VP of marketing of the Chinese tourism giant Ctrip, the CEO of the Intercontinental chain in China, the vice president of the Alibaba Group, the CEO of Air France, the CEO of the Caissa Tourism Corporation and more.

Minister of Tourism, Orit Farkash HaCohen: “I congratulated Roy Kreizman on his prominence in his role as an emissary for the Ministry of Tourism in China. You, like the other apostles in the various countries, respectfully represent us in the global tourism market. This victory shows the important work of maintaining contact with the tourism industry in China and around the world, thinking ahead to the opening day of the sky that we look forward to”.