In cooperation with the Israel Ministry of Tourism, Israel Travel News Ltd. Specially prepared to meet the needs of the British market , this new publication spotlights Israel as a tourism destination. Read more >
Israeli tourism minister: 2019 was record-breaking
The minister presented the revolution in his ministry's marketing efforts that have been implemented in recent years. 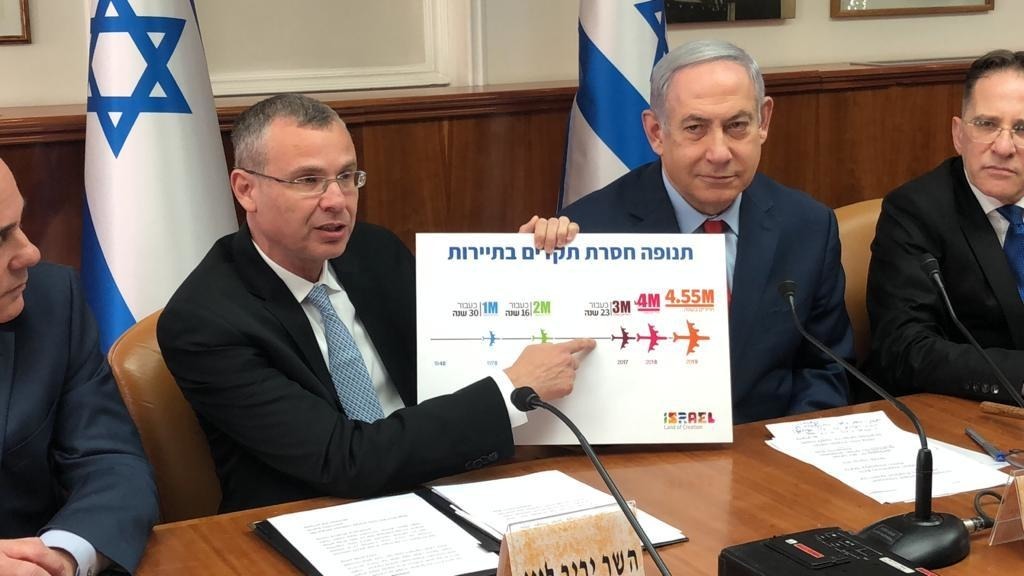 At this week’s government Cabinet meeting, Israeli Minister of Tourism Yariv Levin presented the Ministry of Tourism’s activities in 2019, which culminated in an all-time high of tourists entering Israel – a record-breaking 4.55 million – and the momentum in establishing more accommodation options in Israel.

The month of December alone saw over 358,000 tourists, an increase of 10 percent since last year.

Levin noted that tourism is a significant engine of growth for the Israeli economy and presented the financial contribution tourism brings in numbers. Total revenues from inbound tourism alone in 2019 reached about NIS 22.5 billion. In addition, the total number of direct employed persons in the tourism industry in 2019 was approximately 153,000, of which 13,600 were new employees.

The minister presented the revolution in his ministry’s marketing efforts that have been implemented in recent years, which includes, among other things, a shift from a focus on pilgrimage tourism to that of freedom and recreation. Levin also explained how the ministry switched to a different form of marketing Israel, such as the “Two Cities, One Break” campaign. which promotes visiting both Jerusalem and Tel Aviv.

The ministry’s efforts to draw tourists to Eilat have also paid dividends as the city was marketed as a great destination for Europeans in the winter season, with a video of a sharp transition from the snow to the sun, and beaches with favorable weather all year.

The ministry is currently also marketing the Negev as a great destination for Europeans seeking exciting winter holidays.

Levin also highlighted the government’s efforts to increase the supply of hotel rooms, including reducing regulation, increasing the grants given to entrepreneurs who build hotels (up to one-third of the recognized investment), converting and/or restoring buildings into hotels, and expanding the priority areas elegible for assistance.

The minister recently updated the budget for the construction of the cable car in Jerusalem, which is expected to fundamentally change tourism in the Old City basin. The cable car project is expected to alleviate the problem of transportation and accessibility and will not only allow easy and safe arrival, but will also reduce traffic jams and air pollution. It will also enable the increasing numbers of tourists arriving in Israel to easily reach the holy places in the Old City. The minister emphasized that the cable car will allow the tourist experience to be upgraded to the highest international level, with spectacular day and night views.

The minister thanked his bureau staff and office and CEO, Amir Halevi, and concluded with an announcement that the Ministry of Tourism is planning to expand its marketing activities, to continue to facilitate entry visas to Israel, to expand direct flights to Israel and to increase hotel room supplies with a goal to reduce prices and generate additional demand.