In cooperation with the Israel Ministry of Tourism, Israel Travel News Ltd. Specially prepared to meet the needs of the British market , this new publication spotlights Israel as a tourism destination. Read more >
Harbor Vaults at Caesarea National Park inaugurated
Caesarea Harbor, together with its antiquities, is one of the most popular tourist sites in Israel. 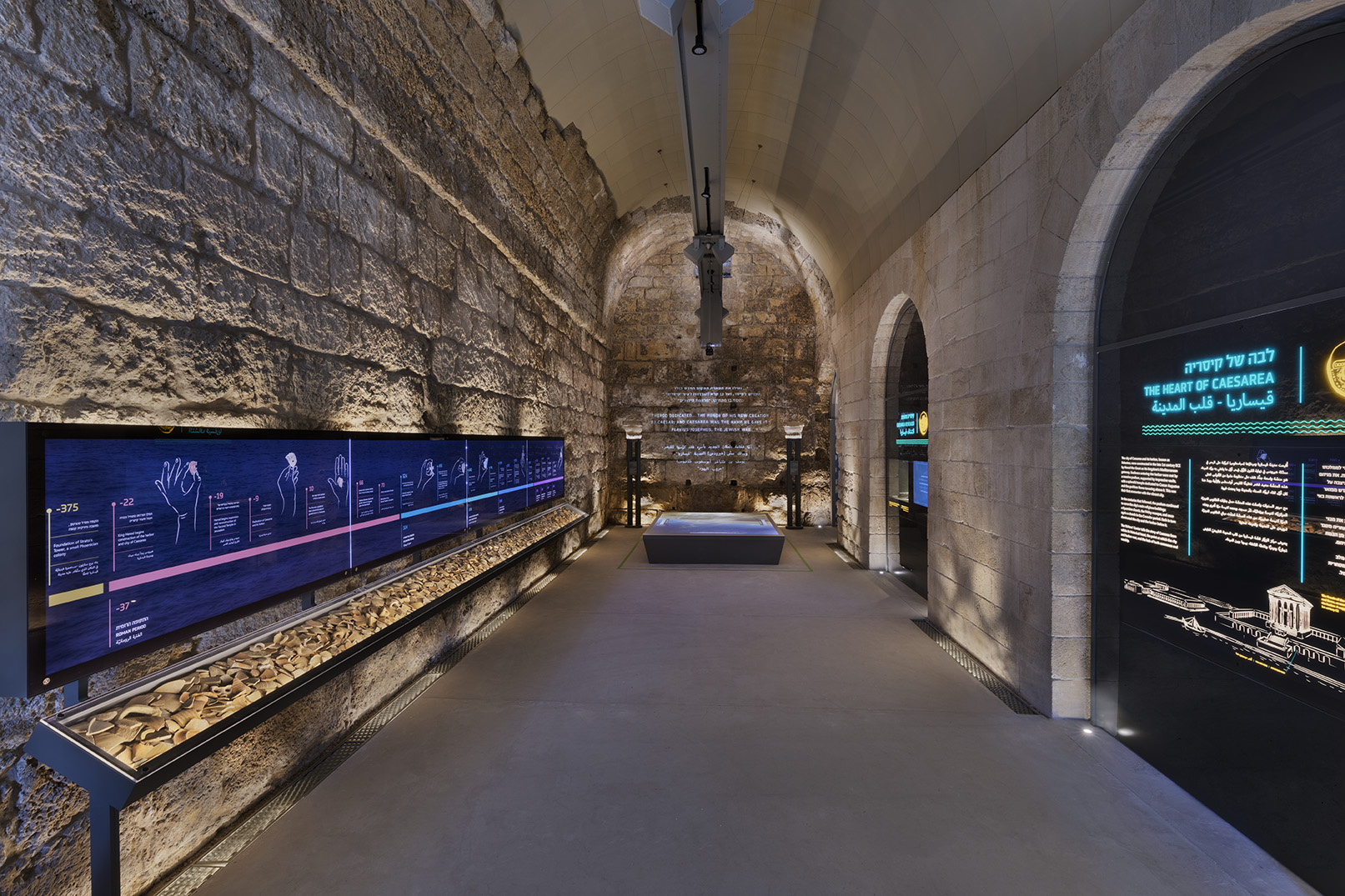 With an investment of more than NIS 150 million by the Edmond de Rothschild Foundation, the complex and challenging engineering design of the Caesarea Development Corporation and five years of research and intensive work by the best archaeologists of the Israel Antiquities Authority and experts from the Israel Nature and Parks Authority, treasures hidden for over 2,000 years in Caesarea have been revealed and the immense Harbor Vaults have been restored.

Caesarea Harbor, together with its antiquities, is one of the most popular tourist sites in Israel. Each year, hundreds of thousands of tourists from abroad enjoy the compound all year round. They visit the beautiful Roman theater, tour the fort promenade with its fortifications and watchtowers, admire the ancient synagogue that attests to Jewish life in the city, walk among the remains of the palace and temples and marvel at the aqueduct. During holidays and breaks, horse racing shows and performances are held in the ancient hippodrome preserved on the site. On site are the artist’s square, cafés and a variety of enticing restaurants overlooking the open sea.

The President of Israel, Reuven Rivlin, and Baroness Ariane de Rothschild inaugurated the monumental preservation and restoration project of the Harbor Vaults at the Caesarea National Park, as well as the innovative Visitor’s Center that brings the audience face to face with the daring, complex and conflicted figure of Herod, presented as never before.

In her remarks at the inauguration, Baroness Ariane de Rothschild said, “Caesarea is an inspiration for our call to co-create the future. We go beyond just acknowledging human diversity. We engage in building a society that is strengthened by all its members, beliefs and traditions. This call is to improve ourselves and pave the way for future generations. It is a call not only for sharing history, but also to honor our responsibility.”

The structure was erected by King Herod on the unique harbor pier, built on the open sea, and was the first of its kind in the ancient world. Herod built the huge vaults- standing 740 meters high and 21 meters in depth, with an average width of 5.2 meters. The vaults were part of the storage system at the port and served as a base for the temple podium dedicated to Herod’s patron, Emperor Augustus. The temple was the beating heart of the impressive city, which in antiquity was a central junction of the global economy and trade between the East and West. The Visitor’s Center, which was built within the reconstructed vaults, combines artifacts from Caesarea’s hidden treasures with innovative technology, and introduces the audience to the daring, complex and conflicted image of King Herod- as no one has dared to show him before.

The restoration of the vaults, which were in danger of collapse, was particularly complex and required more than five years of intensive, collaborative work by archaeologists, engineers and preservation architects. In addition to the archaeological excavation, engineering buttresses were required, a meticulous examination of the stability of the walls and the soil layers throughout the area of the vaults, and the careful dismantling and reassembly of the walls of the complex. During the excavation, it was revealed that Herod’s original vaults had collapsed in the past and were reconstructed in the Byzantine period. Notably, the Byzantine restorers were careful to preserve them in the original outline.

The exhibition halls within the heart of the vaults, which include a variety of exhibits and archaeological treasures uncovered during the excavations, are also safely accessible to visitors with special needs. At the center of the exhibition is a screening of an internationally produced historical epic about Herod.

The lavish production brings back to life the great vision, intrigues, desires, passions, murders and dreams that Herod experienced, right here- in the heart of Caesarea’s antiquities. The film was filmed entirely in a vertical format, corresponding to the “screen” which takes the form of an arched vault, standing at a height of seven meters and built by the hero of the epic – Herod himself. Hundreds of hours of filming and editing, dozens of extras and sophisticated studios in Europe were required to complete the unique experience now offered by the new center, in addition to the authentic exhibits uncovered by archaeological excavations at the port, sea and in the region.

Rivlin said, “The Caesarea we all see today holds the promise of becoming just as magnificent as the ancient city was, if not more. The Harbor Vaults Project, Which we have gathered here to inaugurate, brings us one-step closer to this goal. Already, Caesarea attracts hundreds of thousands of visitors each year. And I believe that one day soon, Caesarea will take its rightful place as one of the world’s most impressive windows to the ancient past. A project of such scale and importance would have been impossible without the support of the Caesarea Development Corporation and the Rothschild family. The Rothschild family helped lay the foundations of the State of Israel. Especially, in their support of higher education in Israel and in their commitment to bring together all “tribes” of Israeli society, the Rothschild family makes a real and positive impact on the future of this country. On behalf of all Israelis, I would like to thank The Baron and Baroness de Rothschild, And the Edmond de Rothschild Foundation.

The excavation, preservation and restoration of Caesarea Harbor, with a huge investment of more than NIS 150 million, included the preservation and restoration of the ancient synagogue, the construction of a promenade at the Crusader walls, restoration of the Roman aqueduct and the restoration and preservation of the temple vaults, the temple platform and the staircase leading to it. The newly inaugurated Visitors’ Center further enriches the experience of visiting the National Park and Caesarea Harbor- one of the leading tourist sites in Israel. The project is another historic step in the work of the Edmond de Rothschild Foundation, led by Baron Benjamin and Baroness Ariane de Rothschild, the successors of the vision set forth by Baron Edmond de Rothschild- the founder of the foundation. This is another link in the chain of generations of the Rothschild family, who continue to work towards the fortification of the State of Israel – through settlement, industry, science, culture and higher education, in the spirit of the vision of the father of all settlements, the famous philanthropist, Baron Edmond Benjamin de Rothschild.

As part of the project, the Israel Antiquities Authority has recently uncovered three more exciting finds near the vaults: A mosaic floor from the Roman period, which was found in a bathhouse next to the temple’s podium and has been replicated in the entrance area to the Visitor’s Center. The colorful mosaic floor with geometrical patterns was part of a semi-dome structure that may have been used for ritual or public purposes and was probably built during the 2nd or early 3rd century CE. It was part of the embellishment of the western façade of the podium of the Temple of Augustus and Hera, the goddess of Rome in Caesarea. The walls of the building were covered with marble slabs, and in front were two pedestals originally carrying statues or other architectural decorations.

The second archaeological find uncovered during the excavation was a cache of about 500 bronze coins from the Byzantine period (6th-4th centuries CE). The treasure, identified by Dr. Donald Zvi Ariel of the Israel Antiquities Authority, was probably buried in a leather bag or other material that had eroded over the years. It was discovered when one of the vaults was exposed. In the absence of a “bank”, as known to us today, the coins were hidden “under the tiles,” that is, under the floor of a magnificent church building from the Byzantine period- probably the cathedral of the city, which served as the bishop’s seat. According to Dr. Peter Gendelman and Dr. Uzi Ad, excavation managers on behalf of the Israel Antiquities Authority, “It’s possible that the burial of the coins is related to the construction of the church complex on the temple podium, since it is known that during this period, the church also took part in the administrative functions of the city.” According to Dr. Gendelman, “The owner of the treasure did not return to retrieve it, and so we found it instead. The reason he never returned will probably remain a mystery.”

The third recent discovery was a mosaic from the 5th century CE bearing a Greek inscription “He who knows all is Hosea and he is blessed.” During an archaeological dig in the huge warehouse complex that was built at the port in the Byzantine period, the inscribed greeting was discovered in one of the entrances to the warehouses. It appears to have been intended for the warehouse operators and seafarers. The inscription, located within a mosaic circle, was deciphered by Dr. Leah Di-Segni of the Hebrew University of Jerusalem. During the Byzantine period, Caesarea was a bustling port city and one of the largest ports of the Byzantine Empire. The warehouse area, which served as transit warehouses for the entire region, extended over 2,500 square meters and included public and private goods. The excavations revealed evidence of trade with Italy, Greece, Turkey, and even the area known today as England.