In cooperation with the Israel Ministry of Tourism, Israel Travel News Ltd. Specially prepared to meet the needs of the British market , this new publication spotlights Israel as a tourism destination. Read more >
20,000 pilgrims flock to Jesus’ baptismal site on Jordan River
Qasr al-Yahud (“the Castle of the Jews”) is located about 40 km. east of Jerusalem, on the border with Jordan. It is one of the holiest sites in the Christian world. 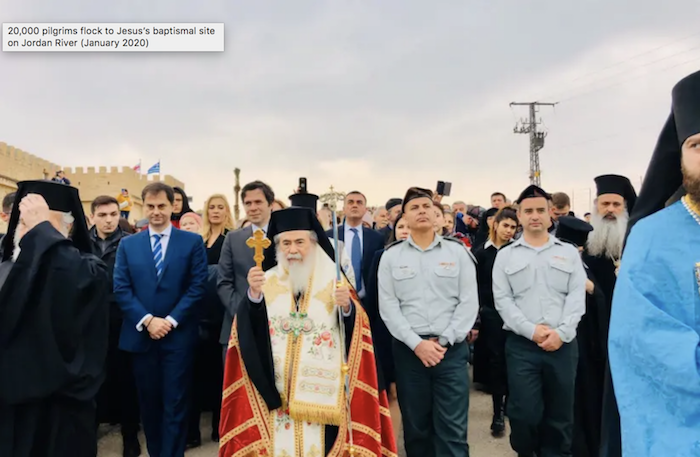 A whopping 20,000 people (at least) have recently taken part in baptism ceremonies at Qasr al-Yahud, the site on the banks of the Jordan River where, according to Christian tradition, Jesus was baptized by John the Baptist, according to Rossella Tercatin at The Jerusalem Post.

Several ceremonies took place in mid-January under the protection of the IDF and Israeli police and the auspices of the Coordinator of Government Activities in the Territories (COGAT) and the Israel Nature and Parks Authority, which administer the site.

Qasr al-Yahud (“the Castle of the Jews”) is located about 40 km. east of Jerusalem, on the border with Jordan. It is one of the holiest sites in the Christian world and is home to eight church denominations. Since the beginning of January, five Church denominations have held baptismal ceremonies there to celebrate the festival of Epiphany.

On Saturday, Theophilos III, patriarch of the Orthodox Church of Jerusalem, guided the procession leading to the ceremony, which was opened by a reception attended by the head of the Civil Administration, Brigadier General Ghassan Alyan and the head of the Jericho District Coordination and Liaison Administration.

The Greek Orthodox and Eritrean communities also held their services on the same day, while on Sunday the Syriac and Ethiopian sects organized their ceremonies, bringing the total number of people visiting Qasr al-Yahud in the past few days to 20,000.

“At this time of year, we wish to greet members of the Christian sect on the occasion of their baptism ceremonies,” Gross said in the statement.

“The Civil Administration put much effort in order to prepare for these important ceremonies as part of its program to preserve freedom of religion and worship for all Christian denominations. Thanks to the ceremonies, we see a marked rise in tourism alongside a boost to the economy, for which I am thankful. On this occasion, I would like to wish all members of the Christian community happy holidays,” he added.

Additional ceremonies organized by the Coptic and Armenian communities are scheduled for the end of January.