In cooperation with the Israel Ministry of Tourism, Israel Travel News Ltd. Specially prepared to meet the needs of the British market , this new publication spotlights Israel as a tourism destination. Read more >
Winter in Israel is just as great as summer
Being outdoors in Israel during the rainy season might not be ideal, but there is plenty to do inside. 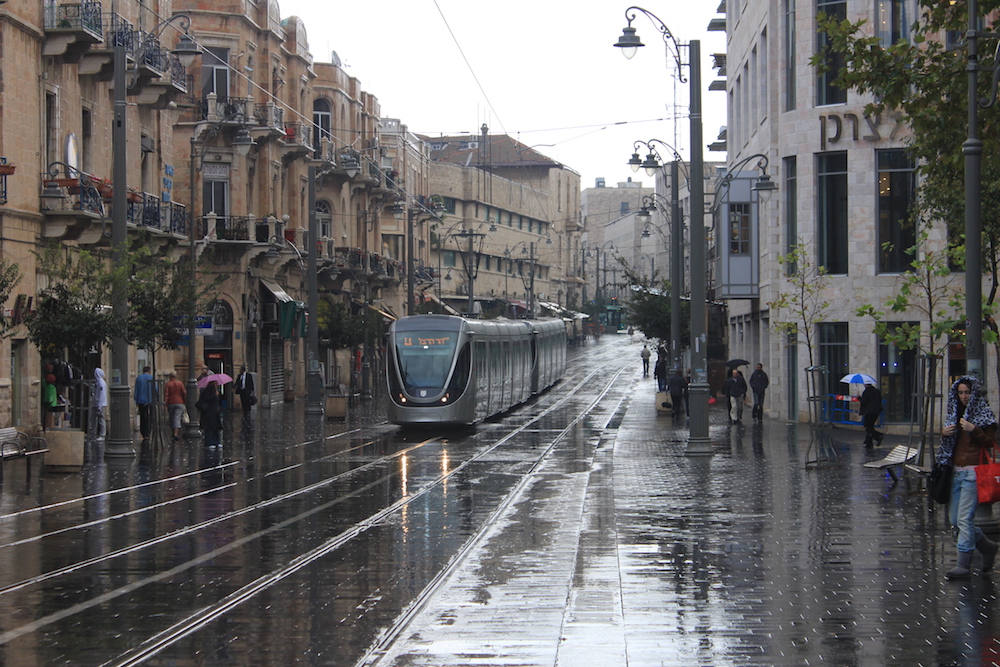 Israel is known of course for its fantastic beaches and sunny weather and there is nowhere better to be than outdoors whether it is in the Golan, Galil, Tel Aviv, Jerusalem, the Dead Sea, the Negev Desert or Eilat.

The winter months are no different and as long as the weather is good, there is plenty to do. For instance, in December, the Israel-Ethiopian Arts Hullegeb Festival brings together traditional Ethiopian culture in theater, dance and music, with Israeli and Western culture. The festival features theater, concerts and dance performances.

The Hirus Ultra Marathon (HUM), also in December, was created to share the sense of freedom when running in the fields, forests and mountains and along the springs and paths. The name “Hirus”, which means “holy” in Greek, is one of the ancient names of Jerusalem and emphasizes the connection between the city and nature.

The two flagship festivals of the winter in Jerusalem are “Hamshushalayim”, usually in December, and “Sha’on Horef” in February, as noted by iTravelJerusalem. Both last an entire month and involve countless concerts, lectures, exhibitions and more. There are also numerous other smaller festivals throughout the season.

Throughout December, Jerusalem hosts a film festival showcasing various genres and themes. The performances provide an artistic perspective on culture, art, music, dance, people’s lives, etc. Apart from this, Israel also hosts many other festivals during January and February.

Hanukkah (the night of December 22 – 31) is the eight-day Jewish holiday celebrating victory over the Greek empire over 2,000 years ago. Every night, for eight nights, the city lights up with “hanukkiyot” (menorahs) in just about every window, and there are public lightings all over town. Walk along the alleys of Jerusalem’s Old City or Nachlaot neighborhood to see the hanukkiyot lit inside glass boxes on windowsills, or join a public lighting at the Mamilla Alrov Mall and the Western Wall. You’ll also find tons of special events around town and delicious (albeit unhealthy) filled doughnuts called “sufganiyot” in almost all the bakeries.

Jerusalem is also one of the best places in Israel to celebrate Christmas, as the Old City comes to life with celebrations, concerts, church services and much more. It’s also only a short trip from Jerusalem to Bethlehem, the scene of the nativity, and there are some great Christmas tours to take you there. The tens of thousands of Christian tourists who come to Israel every December also find seasonal events taking place from Haifa’s annual month-long Holiday of Holidays extravaganza to the Christmas parade in Nazareth.

New Year’s Eve isn’t the big party in Israel that it is elsewhere, but it’s a great opportunity to take advantage of the indulgent menus at some of the fine-dining establishments or cafés around town. Israelis, like many Europeans, call the secular New Year’s Eve “Sylvester,” taken from the name of the pope whose death on December 31 was traditionally marked with a feast. Since midnight December 31 is not a Jewish milestone, you won’t find Sylvester parties in any kosher-certified establishments in Israel. But many bars, clubs and pubs in Tel Aviv and Jerusalem throw celebrations.

If enough snow falls, there’s only one place to ski in Israel, and that is Mount Hermon at the northern tip of the country. Rising 9,230 feet above sea level, Mount Hermon has a vertical drop of just 1,552 feet, making it ideal for beginner and intermediate skiers. Tubing and sledding are also available.

As Israel21c notes, “Israel’s Beit She’an Valley is consistently cited as one of the top 10 hottest places on Earth, with temperatures reaching as high as 53.9C/129F. That’s why many tour guides recommend planning your exploration of the expansive archeological site in Beit She’an National Park for the winter months. An earthquake in 749 CE left behind ruins of grand colonnaded streets, a bathhouse, theater and shrines, all of which Israel’s Antiquities Authority reconstructed.”

But when winter sets in, mild as it is compared to Moscow or Maine, the occasional strong winds and driving rain will make it necessary to find indoor entertainment.

Tel Aviv has several shopping malls, each with its own history and personal touch. Dizengoff Center extends over several buildings. There are large international brands, Israeli brands and food stands. The Azrieli Center is a huge shopping mall that extends over 3 floors: fashion, food, house, lot of fast food and restaurants. Ramat Aviv Center has a mix of luxury shops and international brands.

There are numerous museums situated around the country, covering everything from art, history, science and more, according to iTravelJerusalem. “Of course, there’s the massive, world renowned Israel Museum, but don’t forget some of the more specialized institutions like the Bible Lands Museum, Bloomfield Science Museum and L.A. Mayer Museum for Islamic Art, where you can get a deeper understanding of specific topics.”

The Museum of Islamic Art in Jerusalem has a terrific exhibit on Andalusian art in the Middle Ages. According to the museum’s website, “The exhibition presents gleaming Spanish vessels made of gold, ivory and jewelry, colorful tiles used to decorate the Alhambra and the homes of the Christian aristocracy in the Mudéjar style (featuring Muslim and Christian elements). This was in addition to illustrations in manuscripts (copies) of the Koran, the Bible, the Byad and Ryad novel and Christian psalms that document the religious ritual as well as day-to-day life between the Muslims, Jews and Christians in Spain.

“The Andalusian and Mudéjar artifacts and manuscripts are exhibited against a backdrop of illustration of the Mosque of Cordoba, the Alhambra palace and the Jewish synagogues of Toledo that convey the Andalusian “arches language” which resonates in the music and poetry performed at venues of Caliphs and those who loved the art form.

“The Andalusian Golden Age depicts the blossoming of relations between Jews and Muslims, which produced fertile ground for rich cultural growth.”

The famed Israel Museum in Jerusalem has a terrific exhibition from December 16 through October 2020 and titled “Emoglyphs: Picture-Writing from Hieroglyphs to the Emoji.” As described on the museum’s website, “The hieroglyphic script that developed in Egypt some 5,000 years ago comprised hundreds of pictures. Over time, the pictures were replaced by a writing system consisting of approximately twenty signs: the alphabetic script that reigns in Western culture to this day. Picture writing appeared to have been abandoned forever, but in the digital 21st century, the picture – namely, the emoji – has returned in full force. This exhibition presents the metamorphosis of picture-writing from antiquity to modern times through a wealth of finds from ancient Egypt, displayed against the background of contemporary emoji use.”

Designed by American architect Preston Scott Cohen, the Tel Aviv Museum of Art’s fascinating architecture alone will keep you wandering for hours. The museum is made up of various departments such as the Department of Israeli Art and the Department of Prints and Drawings. In addition to its extensive program of permanent and changing exhibitions, the museum offers a vibrant selection of programs and activities for adults, youth and children: concerts, classes, lectures, guided tours, workshops, and more.

The broad choice of music in Jerusalem is a bit of a secret, but winter is the perfect time to enjoy a concert in an intimate indoor venue – and there are plenty. The Jerusalem Symphony Orchestra boasts musicians who have immigrated from all over the world and perform regularly.  If you’re looking for jazz, rock and other contemporary music, the Yellow Submarine has a concert almost every evening. You can also find free shows at bars like Mike’s Place, Ha-Mazkeka (Shushan Street) and Birman.

You know winter’s here when you see renderings of piping hot bowls of soup in every Jerusalem eatery, and it helps ease the pain of summer’s end. The most popular soups around town are probably tomato with vegetable, lentil and of course, Jerusalem’s famous kubeh soup, but if you’re looking for some more exotic flavors try Hamarakiya, a quaint restaurant that specializes almost exclusively in vegetarian soups. The Inbal Hotel also features a terrific soup night in its lobby.

The Eilat Israman full and half distance triathlon takes place this year from January 29 to February 1. Known as one of the 10 most challenging triathlons in the world, you can participate in this great event, including both half and full triathlon distance triathlons. The event is held in the resort town of Eilat, Israel, and will welcome thousands of international and national participants.

Following tradition, on the morning of Saturday, February 1, 2020, a day after ISRAMAN-EILAT, on the same beach, the annual International Red Sea SwimCup will take place.

The International Red Sea SwimCup is the only winter open sea swim race in the northern hemisphere, and is made possible due to the pleasant winter temperature in the Gulf of Eilat, on the northern tip of the Red Sea, and which is world famous as the premier open-water sea swimming venue on the planet. The regal red mountains, the enchanting sunrises and the majestic sunsets, provide the ultimate backdrop for a perfect swim in the calm deep-blue waters.

The unique festival offers a meeting with artists, winemakers, cheese makers, chefs, musicians, mentors, craftsmen, women and artists who together create a wonderful world in the Western Galilee. You can come for one event or put together a weekend getaway that includes some of the festival days and multiple events.

In addition to the above mentioned events and activities, there is of course the option of just kicking back in a café with a hot cup of anything or going to the movies. On non-rainy days, the weather is usually pretty agreeable and suitable for visiting sites or doing activities that are too hot in the summer.

No matter what you choose to do, make it a great experience and enjoy Israel’s Middle Eastern winter!