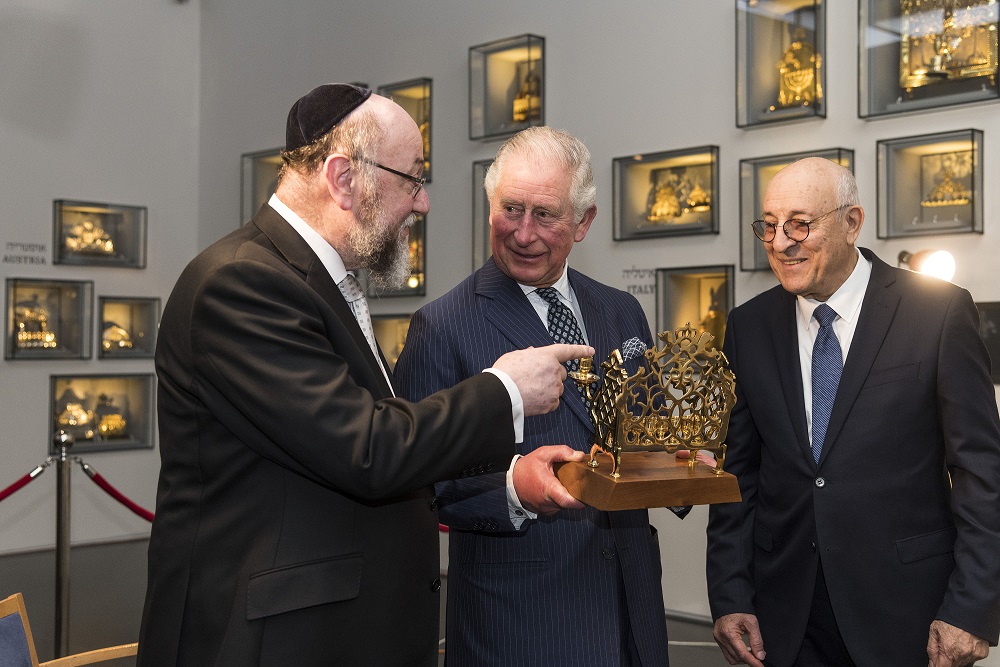 HRH Prince of Wales visited the Israel Museum, accompanied by the UK Ambassador to Israel, Neil Wigan, the Chief Rabbi of the UK, Ephraim Mirvis, and the Chairman of the Board of Directors of The Israel Museum, Isaac Molho, and met with Holocaust survivors.

His Royal Highness’ official visit in Israel came in response to the invitation by President Reuven Rivlin on the occasion of the fifth World Holocaust Forum, which took place in Yad Vashem Holocaust Museum, to commemorate the 75th anniversary of the liberation of Auschwitz and the International Holocaust Remembrance Day. The Israel Museum was also honored to host the King of Belgium, the Grand Duke of Luxembourg, the presidents of Hungary, Austria, Lithuania, and Iceland, as well as many other world leaders and dignitaries who came to participate in the occasion.

As part of his visit to the Israel Museum, the Prince of Wales met with Holocaust survivors and enjoyed a tour of the Wing for Jewish Art and Life. The tour was guided by Rachel Sarfati, Senior Curator at the Israel Museum.

In the Jewish Art and Life Wing, His Royal Highness visited the two reconstructed synagogues from three continents that constitute the Synagogue Route, and viewed the largest collection of Hanukkah lamps in the world, assembled from Jewish communities across the globe.

His Royal Highness met with two Holocaust survivors – George Shefi, who arrived to Britain on the Kindertransport, and Marta Weiss, who survived the Auschwitz concentration camp.

After the meeting, His Royal Highness was taken on a tour of the Shrine of the Book, guided by Dr. Adolfo Roitman, Head of the Shrine and Curator of the Dead Sea Scrolls. They were shown the scroll known as the Commentary of Habakkuk, which was layed out in its entirety especially for the royal visit.

The oldest biblical manuscripts in the world, the Dead Sea scrolls are among the most important archaeological discoveries ever made. Found in Qumran on the northern shore of the Dead Sea, they were written between the second and the first century BCE. The Shrine, an international landmark of modern architecture, was designed by American Jewish architects Armand P. Bartos and Frederic J. Kiesler.

The Israel Museum is the largest cultural institution in the State of Israel and is ranked among the world’s leading art and archaeology museums. Founded in 1965, the Museum has built a far-ranging collection of nearly 500,000 objects, representing the full scope of world material culture. The Museum attracts around a million visitors every year.

In addition to its permanent exhibitions, the Museum mounts dozens of temporary exhibitions a year, based on in-depth research and reflecting the staff’s high standards of excellence. Many of these exhibitions are internationally acclaimed as groundbreaking and outstanding, and several travel every year to different venues across the globe, becoming accessible to huge audiences worldwide and turning the Museum into one of Israel’s leading cultural ambassadors.

Photo: (L-R) The Chief Rabbi of the UK, Ephraim Mirvis, HRH Prince of Wales and the Chairman of the Board of Directors of The Israel Museum Isaac Molho. (Credit: Elie Posner, Israel Museum)