In cooperation with the Israel Ministry of Tourism, Israel Travel News Ltd. Specially prepared to meet the needs of the British market , this new publication spotlights Israel as a tourism destination. Read more >
The Spaniards are back
Pullmantur is one of nine cruise companies that first arrived or returned to Haifa this year after a long absence. 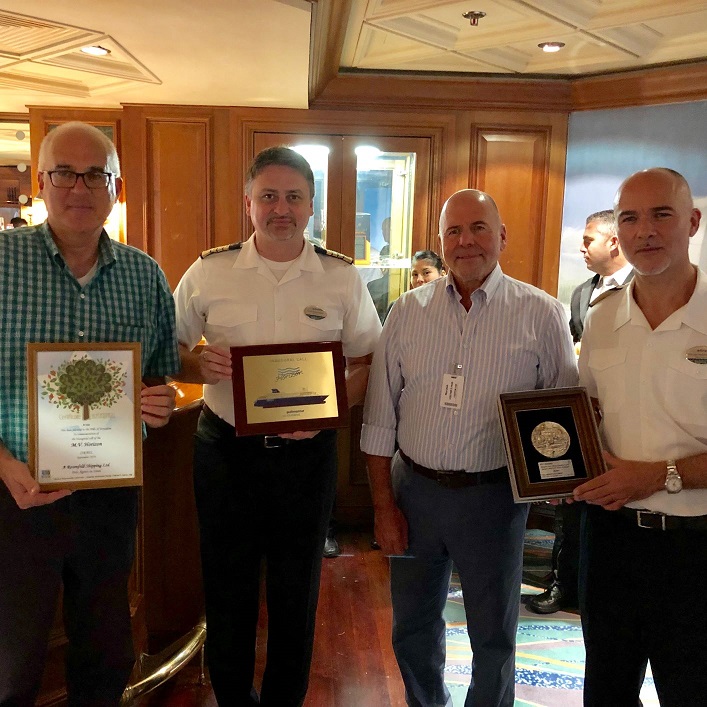 For the first time in over a decade, the Pullmantur Cruises company is returning to Israel and the port of Haifa.
Recently, for the first time, the Horizon ship arrived, one of four cruise ships specializing in a Spanish-speaking passenger crowd.

The ship arrived as part of the cruise line’s route in the eastern Mediterranean, a route that has gained momentum over the past year and is expected to grow significantly next year as well.

The ship embarked on a seven-night cruise from Piraeus, and through Cyprus (Limassol) to Haifa. After two days of visiting Israel, the ship will sail back to Piraeus with a stop on the pastoral Greek island of Patmos.

At the traditional ceremony held at noon on the ship, the CEO of the Haifa Port Company granted the port shield and received the ship’s shield from most of the ship’s captain, as is customary for a ship’s first officer. Also participating in the ceremony was the shipping company agent in Israel, Zeri Rosenfeld.

The ship, as well as another Pullmantur ship, will visit the port of Haifa in the coming year.

Pullmantur is one of nine cruise companies that first arrived or returned to Haifa this year after a long absence.

More will come in the fall, including Royal Caribbean, Norwegian Cruise Lines, MSC, Costa and more. A total of 24 different shipping companies will be operating in the Port of Haifa in 2019. The rate of tourists arriving at the port of Haifa this year is 114% higher than last year, and by 2020 it is expected to be the peak year ever for the port, with over 290,000 Israeli passengers and tourists passing through the terminal.

Zohar Rum, spokesman and director of the Cruise Line at Haifa Port: “We welcome with a great ‘Hola’ the cruise line Pullmantur which returns to Israel after many years. In May, we hosted two company executives for a three-day tour of Israel, and now their ships are arriving. We hope to only know days of quiet, and I have no doubt that the cruise industry will continue to show great interest in the port of Haifa and Israel. There is currently no destination in the world that receives from tourists on ships high scores of destination satisfaction such as Haifa and Israel.”