In cooperation with the Israel Ministry of Tourism, Israel Travel News Ltd. Specially prepared to meet the needs of the British market , this new publication spotlights Israel as a tourism destination. Read more >
Marathon 2022 – The race back to the Nonstop City
The 2022 Samsung Tel Aviv Marathon is back. Last year the runners had to run solo but this year we all run together! 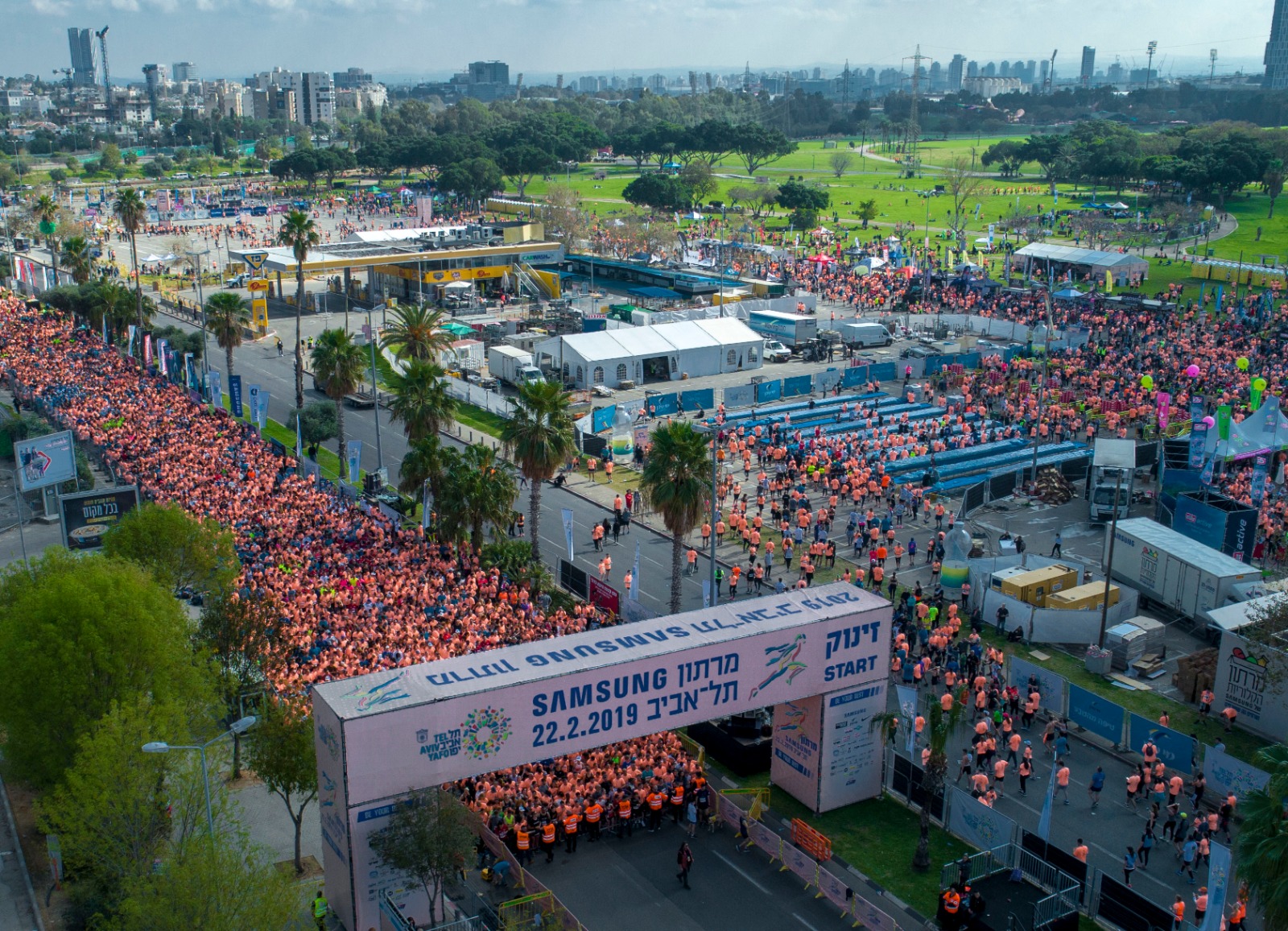 TEL AVIV, February 1st – The 2022 Samsung Tel Aviv Marathon, the leading sporting and established touristic event in Israel, finally returns to its previous form, in the heart of the city of Tel Aviv. The city is preparing itself for the much-anticipated event, for which runners of over 40 different countries have already signed up.

The Samsung Tel Aviv Marathon will be held for the first time after receiving the prestigious ‘Label’ of the World Athletics Association, thus becoming the first Israeli marathon in history to hold this license, joining the list of the largest and leading marathons of the world. The marathon began this registration process two years ago, when a special representative from the International Federation came to rate organizational elements during the marathon and the official recognition will take full effect in the upcoming marathon. A standard mark is a special quality mark for a race, which requires the race organizer to make special assessments according to the guidelines of the International Association in administrative areas such as: extremely accurate measurement of running distance by an international certified surveyor, professional organization of the running track, medical specifications of international standard, tests to prevent the use of prohibited stimulants and more, all in addition to the judgment and control of the Israel Athletics Association.

Following on from last year’s digital marathon competition, the city of Tel Aviv-Yafo with the support of the Ministry of Tourism and Kapaim are proud to host the winner Jervis Johns Salvador, from Manila, the Philippines. Jervis will be treated to an all-expenses paid trip to Tel Aviv, where he will run his first ever full marathon (42.195km) and discover the best sites of the city. Tel Aviv cannot wait to host him and wishes him the best of luck with the marathon!

Ron Huldai, Mayor of Tel Aviv-Yafo: “We are pleased with the return of the Samsung Tel Aviv Marathon in its beloved and familiar format, with the runners and cheerleaders who are expected to visit the city at the leading sports event in Israel. We are proud that the event will be the first Israeli marathon to receive the standard mark of the World Athletics Association and officially become one of the leading marathons in the world. Everyone is welcome and invited to register for any of the tracks and take part in such a unique urban running experience.”

Ronen Salem, Samsung Israel’s VP of Marketing: “After last year’s groundbreaking digital format, the Samsung Tel Aviv Marathon returns to its beloved format and will break another ceiling, in the form of the World Athletics Association’s standard mark that officially marks one of the world’s leading marathon events. Samsung is proud to lead the marathon again this year and to encourage those runners to be groundbreaking and redefine the limits of their abilities.”

Registration for the marathon for all runners is currently in progress and will be available for the various tracks until February 19th, 2022. The event of the Tel Aviv-Yafo Municipality and produced by Kapaim, will respect health guidelines and regulations imposed by the Ministry of Health and will follow the Green Pass. The event, taking place on February 25th, 2022, is expected to attract tens of thousands of runners who will be taking part in one of the five spectacular urban marathons – Full Marathon (42.195 km), Half marathon (21 km), 10 km race, 5 km race and a mini
marathon that will take place on February 23rd at the Ganei Yehoshua park, which will include an end track for children with disabilities and their families (500meters and 1 km).

The starting point (for all allotments) will be located on Rokach Boulevard between Ganei Yehoshua Park and the fairgrounds, from where the runners will continue to the tracks marked by colors that will differentiate between them and pass through the main sites of the city of Tel Aviv. Along the route, runners will pass through the scenic routes of Tel Aviv, including the Rothschild Boulevard, the Tel Aviv port and beaches, Ganei Yehoshua Park, Dizengoff Street, Rabin Square, Hayarkon Street, Ibn Gabirol Street, Old Jaffa and Jaffa Port. The Samsung Tel Aviv Marathon is one of the only marathons in the world that includes ten kilometers of its route along sandy beaches.

Along the tracks, runners will be able to enjoy music stages and water stations sponsored by Neviot. The marathon and half marathon allotments will have energy stations sponsored by GU. The Sports Authority of the Tel Aviv-Yafo Municipality continues the trend of encouraging the sports culture in the city and therefore, thousands of Tel Aviv-Yafo school students will take part in encouraging the runners along the entire route and contribute to the festive atmosphere that surrounds the city. The marathon will end at the Ganei Yehoshua parking lot (in front of the exhibition grounds), where participants and cheerleaders will have a spectacular finale that includes music, a VIP area sponsored by Poalim Wonder from Bank Hapoalim, massages and physiotherapy complexes provided by Target and a sales area of sports and activewear such as ON shoes, the official running shoe of the event.

Distribution of the runners’ kits will take place at the Ofer Mall in Ramat Aviv and the Azrieli Mall in Tel Aviv to allow the runners to collect the kits easily and conveniently.