In cooperation with the Israel Ministry of Tourism, Israel Travel News Ltd. Specially prepared to meet the needs of the British market , this new publication spotlights Israel as a tourism destination. Read more >
Hotels & Diving with Sharks: Everything New in Eilat
A new complex of 3D movies about whales, a hotel that tries to equate a sense of paradise with private pools, a carousel show and the first selfie museum in the city and other new and renovated hotels and restaurants 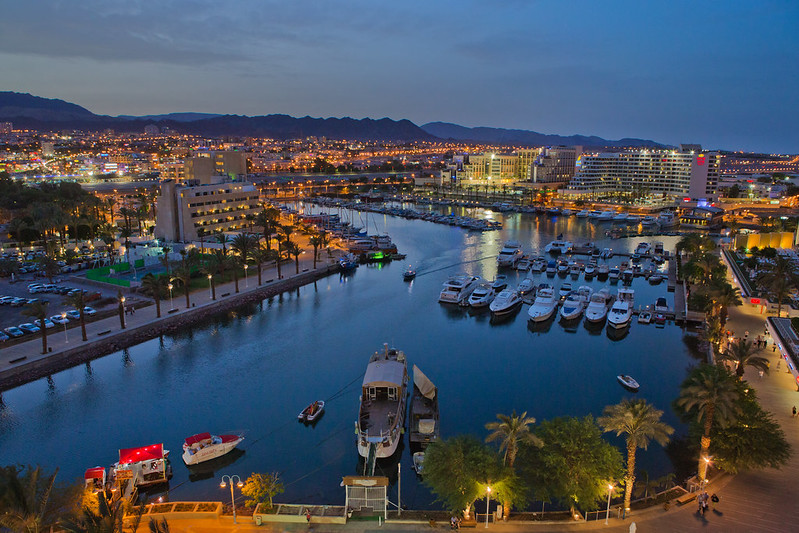 Eilat has undergone quite a few upheavals in recent years and now it is raising its head and introducing a number of innovations.

What is renewed in the city? The hotels. The hotels and guest rooms are undergoing processes of change that have not been seen in Eilat for years. 1,893 new hotel rooms will be added to the city in the area of the old airport and lagoon – on the north coast of the city. This is an increase of about 17% compared to the previous situation, which was constant for many years. Meanwhile, many hotels in the city have been opened in the last two years instead of old hotels or in addition.

The Royal Shangri-La Hotel of the Herbert Samuel chain (Nakash Group) is an example of one. A hotel that opened inside the area of ​​the old Orchid Hotel, located on the south side of Eilat right in front of the underwater observatory (a place that has also been renewed and we will get to later). The hotel first opened in December 2019 but closed during the COVID-19 period, renovated again and reopened after the last Passover.

Royal Shangri-La guests have a separate reception, where they will receive a bracelet that will buy them additional rights, such as free entry to the lounge which operates from 7:00 to 18:00 daily in an air-conditioned complex, entrance to a separate pool located up the mountain. In the rooms and villas a full minibar will be waiting for guests on the day of arrival and personal service.

The 56 rooms of the hotel have been renovated in terms of furniture and design, most of them are called deluxe rooms with balconies but without an adjoining pool and the rest are luxurious and not cheap villas – they have an adjoining pool and a full minibar on the day of arrival. In addition, all Royal Shangri-La guests have an additional pool in a separate area near the lounge, in addition to the main pool located downstairs in the Orchid Hotel area.

NOW Hotel is located at the end of the promenade of Eilat, near the Herods Hotels. The hotel opened last September and is slightly different in the Eilat landscape. We will start with the fact that it caters to adults only and continue with the design of the place reminiscent of a boutique hotel in Mykonos.

The hotel has 19 rooms and suites, including rooms with private swimming pools, garden rooms and suites. There is a main pool on the restaurant floor, heated in winter, and adapted to the weather conditions, and a rooftop pool for hotel guests only and for private events. The hotel has a chef’s restaurant called MOOD and also a hot and cold alcoholic drinks bar. The restaurant is intended for hotel guests and outside guests.

Hotel Soleil (Sun in French) is one of the oldest on the list but apart from the name that remains it has been completely renewed. The hotel was bought relatively recently by “Israel Canada Hotels” and has undergone a massive renovation.

The hotel is located in the central hotel area of the city but at its back – in relation to the promenade. It has 73 rooms, some standard rooms and some more spacious suites. Its pool is relatively small but within five minutes you can reach one of the nearby beaches. In general, the hotel is very close to most of the main attractions in the city: restaurants, the promenade and the shops, a mall facing the sea, writers and consumers and more.

The underwater observatory, one of the oldest places in the city with the iconic structure on the sea that has become one of the city’s symbols, has recently been renewed with two surprising attractions in the park in the complex. One is the possibility of diving, mind you – with sharks. This activity will be open to the public this coming July and will allow anyone who has taken a diving course and over the age of 12 to go a few feet below the water and look at the sharks in the white of their eyes.

The Aqua Dom – a new hall with a cinema hall that screens films made over nine years together with the park corresponding to the one in Eilat, which is located in Hawaii. One of the films explains in a fascinating and accessible way – for parents and children – about the life of whales in a variety of languages. The 360-degree film is projected on a large screen that extends over a large dome and together with 3D glasses creates a feeling that they are in the depths right next to these huge creatures and try to touch them or keep their faces as they approach.

Another new attraction has recently opened in the city and is a kind of selfie museum. Two words that are still weird to hear together but lately it seems that every city that tries to excite the younger tourists, is opening up such a variation. This is a complex called Dream Pic with twenty painted backdrops and three-dimensional scenery, including accessories and art details.